The Arlington County Police Department’s Robbery/Homicide Unit is investigating the early morning assault of a woman in the Lyon Village neighborhood of north Arlington.  Detectives believe the suspect may have committed several similar assaults over the past two months.

The most recent assault occurred today in the 2600 block of Lee Highway at approximately 1:20 a.m.  A woman who had recently arrived at her apartment heard a knock at the door.  When she opened the door, a man lunged at her with a plastic bag.  The woman was able to block the man’s attack and he fled on foot. After the woman called 911, numerous police officers set up a perimeter and a short time later a man meeting the general description of the suspect was stopped at a nearby location.  The man was interviewed during the morning hours by detectives and subsequently released without being charged.  Investigators in the case characterized the man as a “person of interest”.

There have been three other incidents along the Ballston-Rosslyn corridor in Arlington between April 16 and May 28 in which women walking alone at night have been attacked from behind by a man with a plastic bag.  In each case, the woman was able to fight off the suspect and he fled on foot.  The suspect is described as a black male, 20 to 35 years old, 5’10” to 6’ tall, with a medium build, light to medium complexion and a clean shaven face.

Police strongly encourage women to avoid walking alone after dark, to stay in well lit areas, and to be aware of their surroundings.  After the latest incident, they also advise that people be very careful when deciding whether or not to answer a late-night knock at the door.  Women who find themselves alone and confronted by a suspicious person are advised to draw attention to themselves by yelling or blowing a whistle and to run away if possible.

Anyone with information about these cases, or about similar attacks that may be related, is asked to contact Detective D.R. Cupka at (703) 228-4193.  If callers wish to remain anonymous, they can call Crime Solvers at 1-866-411-TIPS (8477).  Crime Solvers offers a reward of up to $1,000 for information that leads to an arrest.  Callers to Crime Solvers do not have to give their names and do not need to testify in court.

THE FOLLOWING CASE TO BE HEARD BY PLANNING COMMISSION AND COUNTY BOARD on January 25, 2020:
ZOA-2020-01: An ordinance to amend, reenact, and recodify ACZO Articles 7 & 12 to permit the establishment of assisted living facilities, independent care living facilities, nursing homes, and continuing care retirement communities in the C-3 zoning district to enable their establishment within the Clarendon Revitalization District as shown on the General Land Use Plan, and for other reasons required by public necessity, convenience, general welfare, and good zoning practice.

A group is organizing to look into excessively high water bills.

To to promote housing options for seniors and persons with disabilities., the County Board voted to amend the Zoning Ordinance. The change allows new assisted living and similar facilities in areas where multifamily development is already allowed. The change also lowers parking requirements at these facilities.

The amendment expands permissible areas to 18 zoning districts located near and along Arlington’s major planning corridors. Designated areas in Lyon Village are primarily along Lee Hwy and Wilson Blvd (shaded areas on map). Some of these areas currently include single-family houses.

Staff Presentation to Board

No mention of transit
Did failure to address Columbia Pike transit hamper development in the parts of Arlington and Fairfax counties most available for affordable housing?

Peter’s Take:
How The County Should Help APS Plan For New School Seats
by Peter Rousselot

Letter to the Editor:
APS Should Hire Outside Consultant for School Boundary Process
by Jennifer Myers

Arlington School Board Members Bailing Out
A Sun Gazette editorial

A driver struck a bicyclist Friday morning at Wilson Blvd and N 10th St. The bicyclist had severe, but non-life threatening, injuries. Police said the driver was cited with failure to yield.

Before You Buy a New Car…
“The popularity of SUVs and light trucks are contributing to the increase in roadway fatalities… If you’re behind the wheel of one of those vehicles… you need to take extra caution. It has a lot more weight… poor visibility, it takes you longer to brake and it is harder to see around turns. Drivers of those vehicles need drive very carefully to compensate.” — NYC DOT Commissioner Polly Trottenberg

Thanks to all who made the 2019 LVCA Holiday Party a success. A good time was had by all, especially the kids at the craft tables. Parents grateful that glitter and plastic gems enticed our kids away from tables laden with appetizers and sweets.

Dec 14, 2019: The County Board approved a project to widen North Glebe Road (Route 120) to add northbound and southbound full-width left turn lanes. The new turn lanes will improve traffic flow and give pedestrians more time to cross the street. Work to underground overhead utilities in the project area that began in January 2017 is near complete. Roadway construction is anticipated to start in spring 2020 and last for two years.

Driver’s injuries were not life threatening. The deer died. Deer-involved crashes are greatest during the mating season, Oct through Dec, particularly around dawn and dusk. Drive carefully!

Community Survey on
APS Proposals to Move Key Immersion School
APS has proposed to move the Key program to either:
● Arlington Traditional School (west of Ballston)
● Carlin Spring Elementary (in the southwestern part of the County)
Participate in a survey about these changes: Key School Enrollment Survey (survey closes Dec 6)

Press Coverage
For NoVa Schools, A Question Of Where to Put All Those Students (WaPo)

Letter to the Editor: APS Should Hire Outside Consultant for School Boundary Process

What to do with unspent funds remains controversial. Should the year-end surplus be:
● Rolled over to the next FY, reducing the need for tax increases?
● Used to fund projects that failed to get funded in the previous FY?
● A bit of both?

Provide Your Early Input on the FY 2021 Budget

Skyrocketing Property Tax?
Arlington County has one of the highest median property taxes in the United States, ranked 40th of the 3143 counties in the USA. Arlington collects, on average, 0.8% of a property’s assessed fair market value, which amounts to about 3.6% of average resident’s yearly income.
Source: tax-rates.org

Arlington’s SMD (E-Scooter/E-Bike) Pilot Evaluation Report
Arlington’s pilot kicked off in September 2018 with Bird and Lime and is expected to end in December 2019 with seven operators. This report provides the results of the evaluation of the nine-month Arlington County pilot program, including trends in deployment, utilization and feedback from the community to understand Shared Mobility Device (SMD) adoption and system performance. END_OF_DOCUMENT_TOKEN_TO_BE_REPLACED

Vehicle Decals No Longer Needed
The Arlington County Board voted last year to eliminate the requirement to display a decal. You can remove your old decal and dispose of it. The Motor Vehicle License fee ($33 for cars), which is an annual registration fee, has not been eliminated.

Where: 1800 block of N. Highland St (near LV Park)
When: Approximately 3:36 a.m. on November 16, Saturday
ROBBERY, 2019-11160049, 1800 block of N. Highland Street. At approximately 3:36 a.m. on November 16, police were dispatched to the report of an armed robbery just occurred. Upon arrival, it was determined that the victim was walking in the area when he was approached by three unknown suspects, who each displayed a firearm and demanded the victim empty his pockets. The suspects stole the victim’s personal belongings and fled prior to police arrival. The suspects are all described as black males, 18-20 years old, 5’10”-6’0”, wearing dark colored hoodies, dark pants and dark masks. The investigation is ongoing.

GMU Arlington Campus Expanding
GMU announced plans to tear down one of its four Arlington buildings to construct a 400,000-square-foot building. The new building will house classrooms, computer labs, short-term housing, an Institute for Digital Innovation, and a newly established School of Computing.
Read More at ARLnow

Arlington real estate assessments are expected to rise by as much as 4% beginning in January which means property taxes could rise by 4% even without an increase in the tax rate.

Keep up with the latest budget and CIP news and information and opportunities to participate in the budget process at budget.arlingtonva.us. 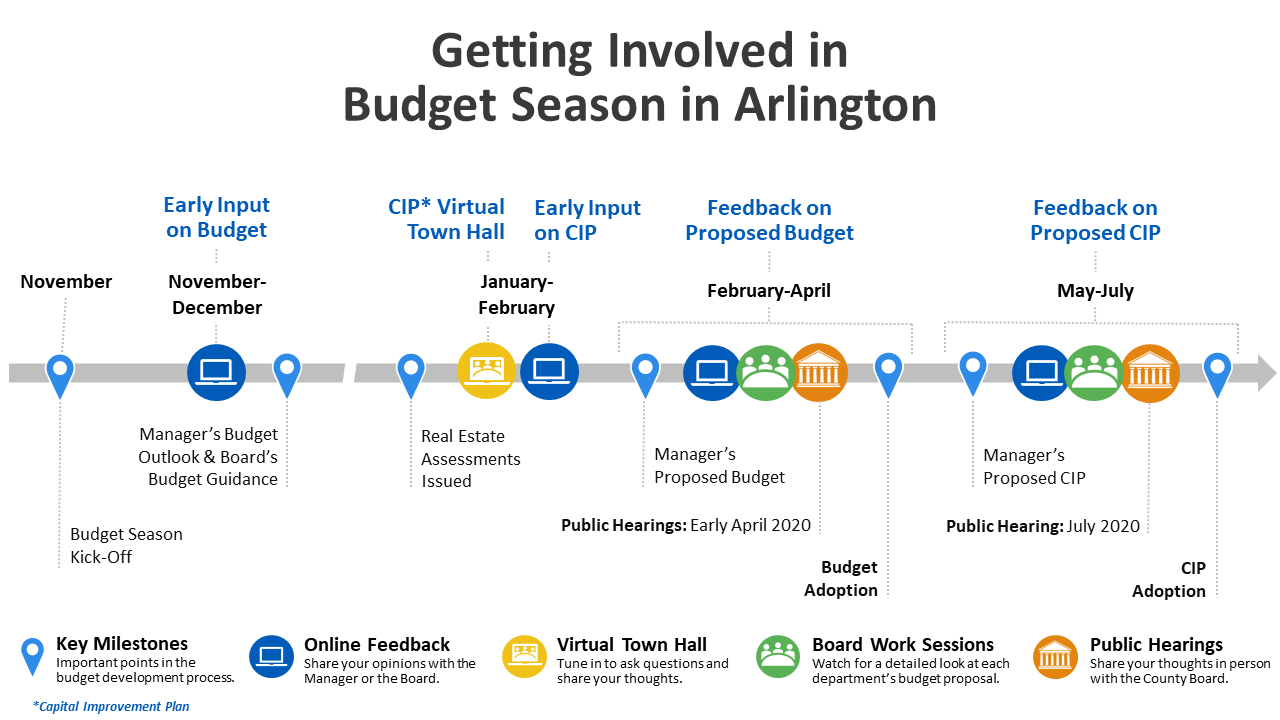 County Board Writes FAA to Oppose Flight Path Changes
On Nov. 4, 2019, the Arlington County Board sent a letter of opposition to the FAA regarding proposed changes to flight procedures at Ronald Reagan Washington National Airport (DCA).

The FAA and the United States Secret Service (USSS) presented the proposed changes to the Metropolitan Washington Airports Authority (MWAA) DCA Community Working Group on May 23, 2019.

Click/Press Item to View
Events may be cancelled, postponed or virtual

Keep in touch with what's happening in Lyon Village. Sign up today for the LVCA E‑Newsletter:

Don’t send to Jason. He no longer does this!

Remodeling for Aging in Place

View past issues of the LVCA Bulletin in PDF format.

AC Maps is slow to startup

Recycling: What in Which Bin?

Car Free Near Me

26 walkabout maps, none for LV

Boil Water Advisory: What To Do (PSCEM)

VA Board for Contractors